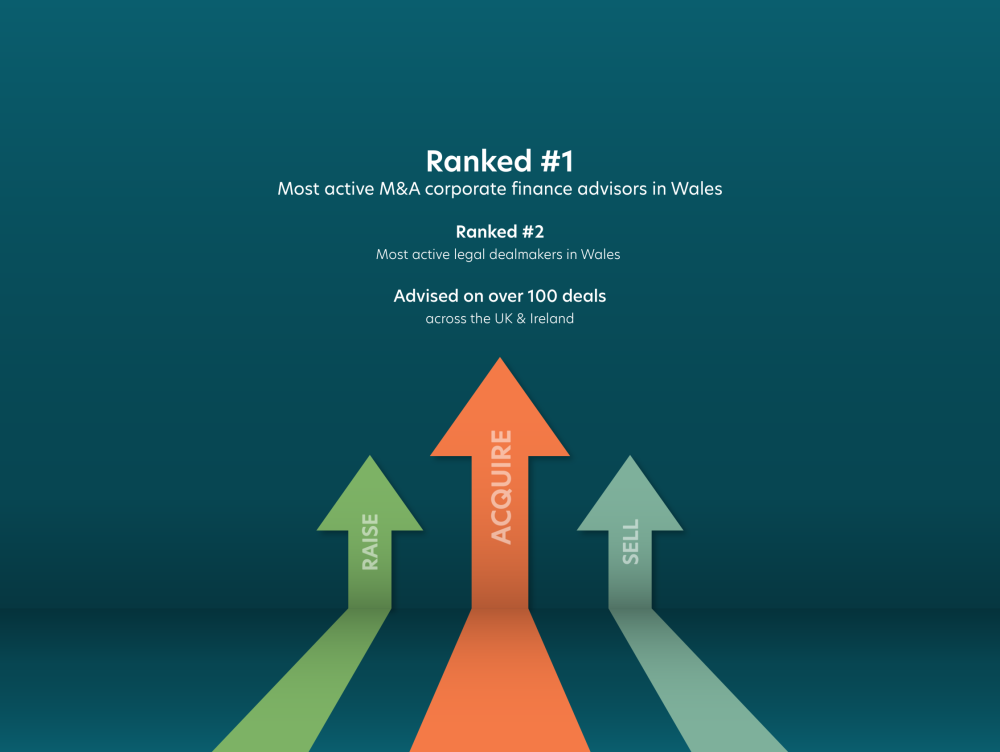 Following a successful year, the GS Verde Group ranked 1st and 2nd in Experian Market IQ reports on deal-making in 2021, a unique feat as the only advisory team to rank in both the corporate finance and corporate legal elements of the Experian rankings in Wales.

Now, with a pipeline of deals across the UK and Ireland, the Group is primed for another year of continued success with record results forecasted for 2022 and expected growth in both staff and office space too.

GS Verde were the only business to rank in both categories due to the nature of its multi-discipline M&A advisory team that provides legal, finance, tax and communications advice for end-to-end support for corporate transactions.

More widely, the business advised on over 100 deals across the UK and Ireland, with GS Verde fast becoming a go-to advisor for business sales, mergers and acquisitions, and raising investment.

Speaking on the success, Nigel Greenaway, CEO, GS Verde Group said: "The report by Experian Market IQ was not a surprise to us, as our M&A teams were exceptionally busy during the period reported on, however it is quite some achievement by our teams to rank in both the finance and legal reports, a feat not matched by any other M&A team in Wales.

"Deal activity soared in 2021, and GS Verde has adapted to this elevated pace, meeting the demand for quick results and evolved deal strategies. With the market thriving generally, we have embraced the shift towards digitisation to expand our reach."

"There is much to look forward to in the year coming. M&A activity is forecasted to remain, if not go beyond the elevated levels seen last year, and GS Verde will develop upon our growth in the UK and internationally."

Across the UK, the number of transactions increased in 2021 by 14.3% from the previous year, with deal values in Wales reaching just over £7.9bn, a sharp upsurge on the £3bn total that was recorded for the whole of 2020.

Standout deals for GS Verde during the year include supporting commercial cleaning company A&R Services to secure a Management Buyout, the successful completion of an Employee Ownership Trust scheme at Paramount Interiors, and the cross-border acquisition of Abergavenny Fine Foods, further opening up Wales and Welsh business to the world.

The business' continued success has also earned it the title of Best Multidisciplinary M&A Advisory Group in the UK, awarded by Acquisition International.

Mr Greenaway continued: "Throughout 2021 the GS Verde Group reached new levels of growth; opening our first international office, seeing a 30% increase of staff since the middle of the year, including a number of senior appointments, and securing our best year of trading yet.

"There is much to look forward to in the year coming. M&A activity is forecasted to remain, if not go beyond the elevated levels seen last year, and GS Verde will develop upon our growth in the UK and internationally."